Kenneth Rowntree was born in Scarborough. Between 1932 and 1935, he studied at the Ruskin School of Art in Oxford where Eric Ravilious and Barnett Freedman, both artists who criss-crossed the border between fine art, illustration and design, taught. This would prove to be an important influence on his development.

During the war he moved out of London to Great Bardfield in Essex where there was a community of like-minded artists, including Ravilious and Edward Bawden. At this time he contributed to the War Artists Scheme and to the Recording Britain Scheme. Here his work was admired by John Piper: "He always had an eye for the things in the English countryside that needed noticing," Piper wrote.

After the war he held his first exhibition at the Leicester Galleries in London. Returning to live there, he became Head of Mural Painting at the Royal College of Art, designing a mural for the prestigious Festival of Britain in 1951. In 1959, he returned north to become Professor of Fine Art at Durham University. It was here that he formed a close relationship with the painter Victor Pasmore, who was exploring abstraction and constructivism, elements of which crept into Rowntree’s work.

"Rowntree had a singular way of looking at things," wrote Alexandra Harris in the centenary catalogue. An English vernacular painter and modernist designer, he had a way of "looking at things straight on… If he put a jug on the table he had no qualms about putting it firmly in the centre," she continued. Here, she could have been referring directly to this painting where, characteristically, the jug is not at the centre of the table, but at the centre of the painting. Rowntree’s geometry always had something quirky and entirely distinctive about it. When Rowntree retired from teaching in 1980, he gave more time to painting, and works like Jug in a Landscape, with its clear lines and simplified perspective, can be compared with the work of another Yorkshireman, David Hockney. It does not require too big a leap of the imagination to transfer Rowntree’s scene to Hockney’s poolside table in Los Angeles with the Hollywood hills and blue sky beyond. 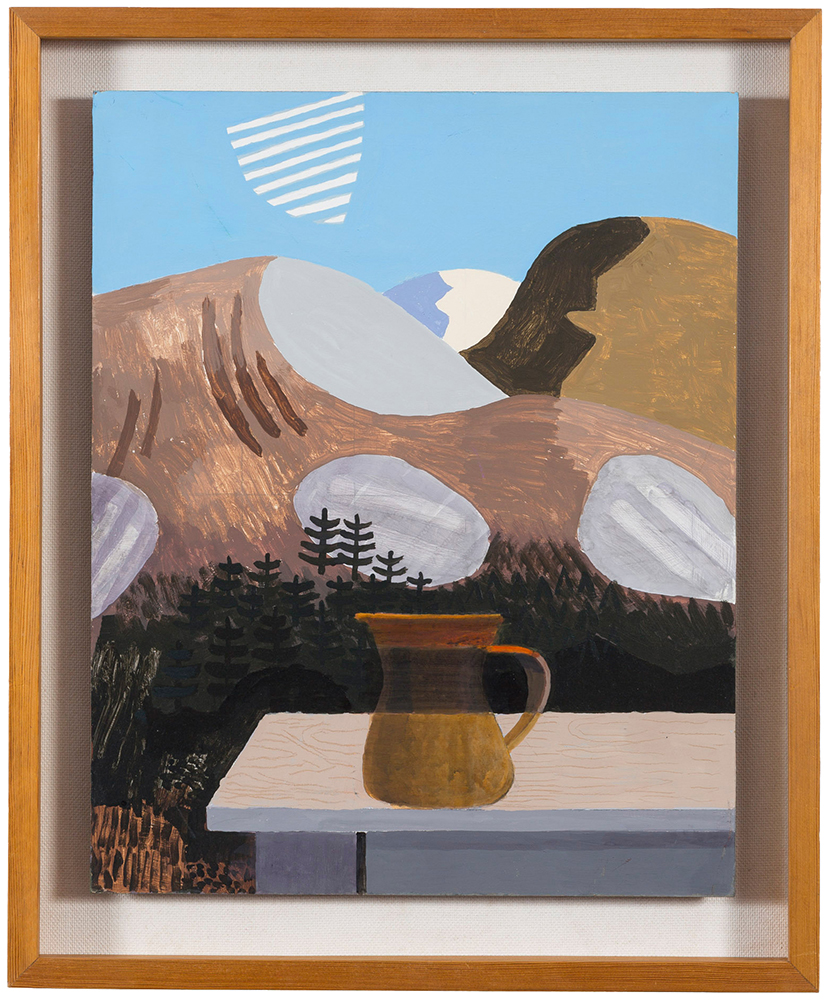