Professor Kenneth McConkey writes: The completion of The State Visit of Queen Victoria to the International Exhibition, Glasgow, in 1888 greatly expanded Lavery’s social horizons. When it became known that the Queen had agreed to sit for him, none of the West of Scotland’s ‘great and good’ could deny him. Living in Paisley he was favoured by patrons of the tennis club, invited to private croquet parties held by wealthy wool magnates, and attended the annual regatta at the Yacht Club at Hunter’s Quay. Here he painted a number of sketches of yacht racing and a splendid study of Lady Glen Coats. The present canvas depicting the deck of a motor launch forms part of this sequence and suggests that, moored to the side of the Firth of Clyde, it functioned as a temporary studio during a regatta. Although dated 1893, it is likely that the picture was painted around 1890 when the other Hunter’s Quay pictures were executed (Sailing Boats on the Clyde, Hunter’s Quay, 1890, private collection).

Shipboard sketches were not uncommon for Lavery. He would go on to paint figures resting on the rail of a ‘P’ liner in 1891 and in later years would take his painting kit on board naval vessels during the Great War. While he may well have seen Arthur Melville’s watercolours such as On Board the ‘Magdala’, 1881, (Berwick-on-Tweed Borough Museum and Art Gallery) or Pilgrims on the way to Mecca, 1882 (Chazen Museum of Art, USA), the present picture is unique for the way in which Lavery uses the awning to dramatic effect, blocking out much of the sky and intensifying the smooth cobalt of the river estuary. Here the racing takes place under the scrutiny of two women spectators, one of whom is suitably attired in fashionable ‘whites’, with a matching navy and white boater. It is the type of dress we find in contemporary boating portraits by Paul Helleu and updates that of the young women arriving for a dance on a larger vessel in J.J. Tissot’s The Ball on Shipboard, circa 1874 (Tate).

What separates Lavery from Tissot and allies him to Helleu, is the flexible Impressionistic handling, developed in the Glasgow International studies. He responds spontaneously to the scene before his eyes, and with great self-confidence blocks in the entire mise-en-scène, anchoring the composition firmly around the unmanned ship’s wheel.

In 1893 Lavery signed and inscribed this picture to the solicitor, William Webb. It was a friendship that would blossom. In later years Webb was in regular contact with the painter as legal advisor to the International Society of Sculptors, Painters and Gravers, and would acquire The Green Hammock (sold Christie’s 13 December 2012) in gratitude from the painter. He also commissioned Lavery to paint portraits of members of his family including his daughter, Mercy Webb. 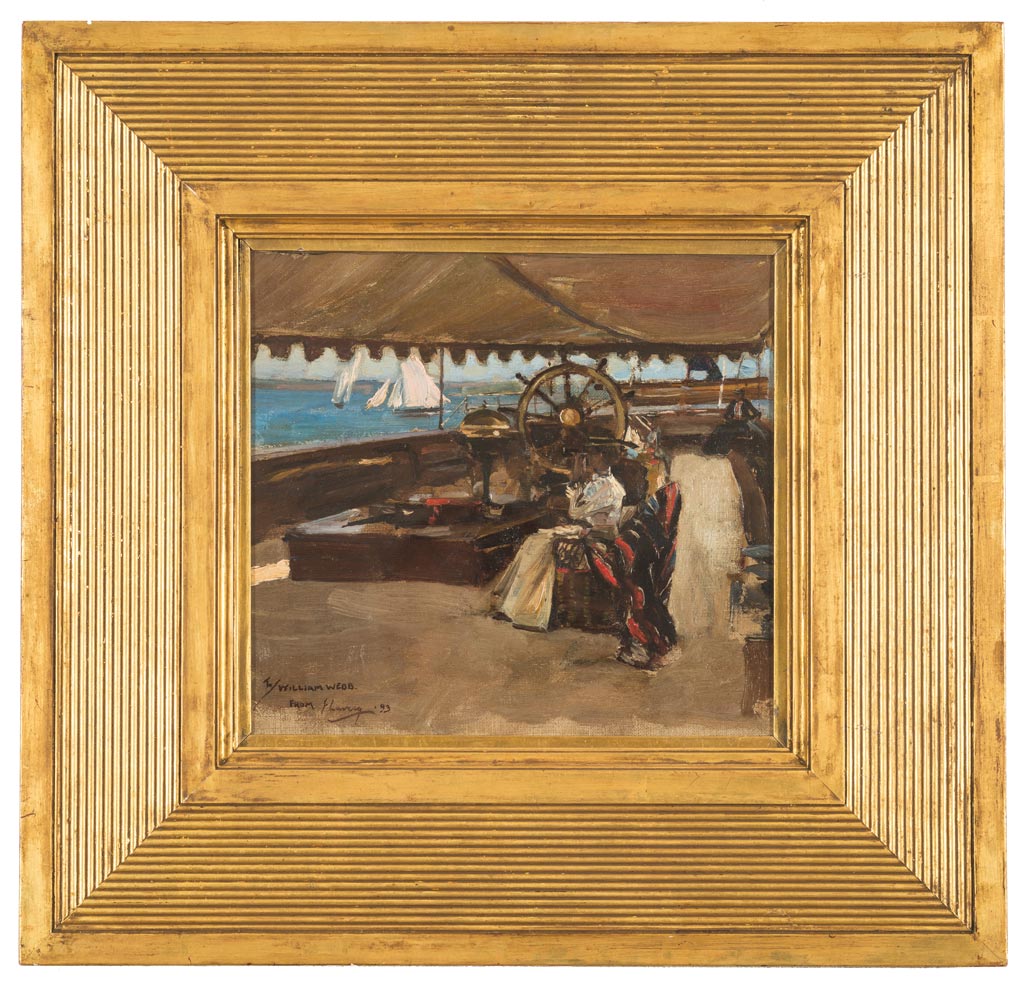