Duncan James Corrowr Grant was the son of an army Major, born in Rothiemurchus, Aviemore. He spent much of his early life in India & Burma (1887 – 1894), educated by a Governess, then on to Hillbrow School, Rugby 1894-99, spending school holidays at Hogarth House, Chiswick with his Grandmother, Lady Grant. He boarded at St Paul’s School, London for two terms 1899 – 1901 where he received several art prizes. From 1900 to 1906 Grant lived with his aunt and uncle, Sir Richard and Lady Strachey and their children. His aunt persuaded his parents that he should enrol at the Westminster School of Art for the next three years. He spent a year in Paris in 1906, courtesy of a monetary gift from an aunt, studying at the Academie de la Palette, Jacques-Emile Blanche’s school.
Grant at this time would have seen works by the French Impressionists, visited Picasso’s studio and even had an introduction to Matisse himself. He had also been to Florence to see frescoes and early renaissance works.

In 1909, Grant moved into 21 Fitzroy Square which cemented the foundation for his association with The Bloomsbury Group. The Group was made up of writers, intellectuals, philosophers and artists, generally from either the University of Cambridge for the men and Kings College, London for the Ladies. They were mostly from upper middle-class families who rejected the conventions of Victorian life and are rather aptly described by the famous quotation attributed to Dorothy Parker, “they lived in squares, painted in circles and loved in triangles”. Radical and bohemian, the Group would promote each other to potential friends and clients. The core members being Clive & Vanessa Bell, E M Forster, Roger Fry, John Maynard Keynes, Desmond MacCarthy, Lytton Strachey, Leonard & Virginia Woolf and of course Duncan Grant.

Grant is best known as a painter, designer of textiles, pottery, theatre sets and costumes. His style is post- impressionist which developed from his associations in Paris and exhibitions mounted in London, notably the Manet and Post-Impressionists exhibition at the Grafton Galleries, Mayfair mounted by Roger Fry in 1910. Fry was himself an artist and art critic. He opened the Omega workshops in 1913 at 33 Fitzroy Square, Bloomsbury. Its Directors were Roger Fry, Vanessa Bell and Duncan Grant. Many other artists were to pass through the workshops but would not stay more than a few months. These included Frederick & Jessie Etchells, Henri Gaudier-Brzeska, Henri Doucet, Nina Hamnett, Paul Nash, Edward Wadsworth and Wyndham Lewis. It employed a business manager, a caretaker and a group of artist assistants. The workshops sold furniture, fabrics and household accessories such as painted murals, mosaics, stained glass and furniture, all designed and made by the artists, in public showrooms where customers could browse and buy. All work was produced anonymously and marked only with the symbol of the Greek letter Omega, the last letter of the Greek Alphabet. It was a forerunner of an interior design service influenced by post-impressionism, cubist and fauvist artworks. Products were expensive and not given good press resulting in exclusivity only to be afforded by wealthy customers such as Lady Cunard & other aristocratic friends of the group. Grant would work only three days a week for Omega and the rest of the time was free to pursue his own art. Sadly the workshops struggled to survive financially and had to close only six years later in 1919.

This beautiful still life by Duncan Grant features an Omega tablecloth on which to place the carafe of red wine, jug of flowers, bowl with a lemon and pipe with an ebony handle. It is more than likely that Grant may have designed the textile tablecloth himself. The fabric illustrates a very Matisse influenced design and the overall work utilising loose brushwork so typical of the post-impressionist style. Grant continued to design textiles, lamps and decorated furniture after Omega closed down when he moved to Sussex, where this work would most likely have been painted at Charleston in 1957.

Although Vanessa Bell was married to Clive Bell and Duncan Grant was predominantly homosexual, their relationship was both personal and creative. They moved into a house named Charleston, near Firle in Sussex where they lived together for the rest of their lives, more than 40 years. They had a daughter together, Angelica, who would go on to marry David Garnett, one of Grant’s lovers. Vanessa Bell died in 1961. Grant stayed on at Charleston with this poet lover, Paul Roche who took care of him until Grant died in 1978 despite his own marriage with five children. Grant’s remains are buried beside Vanessa Bell’s in St Peters Church, West Firle, E. Sussex.

Grant exhibited at the New English Arts Club from 1909 and the Friday Club (founded by Vanessa Bell) from 1910. He became a member of the Camden Town Group in 1911. In 1913 he exhibited with the Grafton Group, whose members included Fry, Bell and Wyndham Lewis. His first solo show was held at the Carfax Gallery in 1920. He was a member of the London Artists’ Association from 1929 to 1931. He was represented at the Venice Biennale in 1926 and 1932. His work was shown in the “Coronation Exhibition of Contemporary British Artists” at Agnew and Sons, London in 1937. A retrospective was held in 1959 at the Tate Gallery with a subsequent Arts Council tour. In 1964, Wildenstein & Co. Ltd gave a retrospective show of his work. In 1966 at the Royal West of England Academy, Bristol, gave a show of his and Vanessa Bell’s work. In 1969 there was an Arts Council tour. Solo shows at Anthony d’Offay Gallery in 1972 and 1975. In honour of Grant’s 90th birthday, exhibitions were held at the Tate Gallery and the Scottish National Gallery of Modern Art. 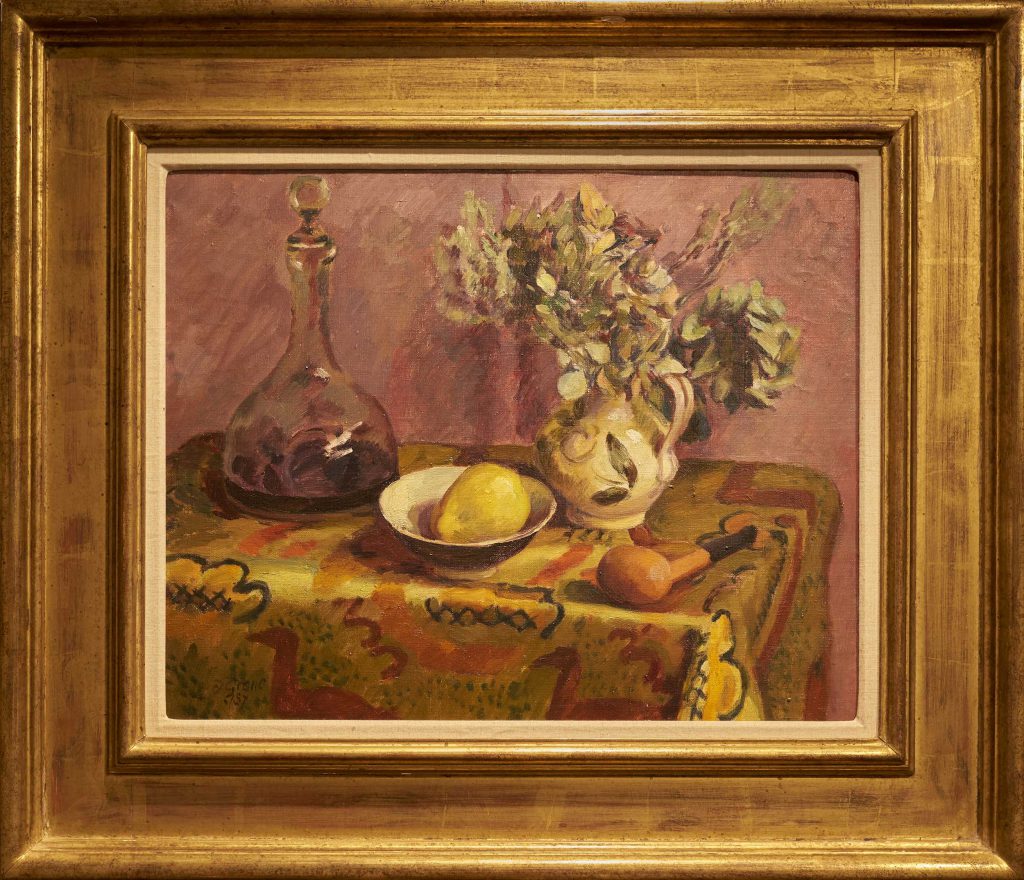