Born on 20 February 1910 in Dorking, the son of R.C. Trevelyan, poet and scholar, and nephew of Sir George Trevelyan the historian, Julian Trevelyan was educated at Trinity College, Cambridge, and studied art under S. W. Hayter in Paris 1930-34, where he worked alongside artists such as Ernst, Kokoschka, Masson, Miró and Picasso. It was in this atmosphere that he turned to Surrealism and became a founding member of the British Surrealist Group.

In 1935 he settled at Hammersmith, overlooking the Thames in 1935, and was given his first one-man exhibition at the Lefevre Gallery in 1937. Having served as Camouflage Officer during the war, he became a member of the London Group in 1948 and its Vice-President in 1956. Trevelyan taught at the Chelsea School of Art from 1949 and at the Royal College of Art from 1955. He married first Ursula Darwin, potter, in 1934, and second Mary Fedden, painter, in 1951.

Julian Trevelyan’s life work is only recently being reassessed by the market beginning with his early surrealist work from the '30s and more realistic paintings of the late '40s which have risen from very little up to as much as £45,000 at auction. His later, more linear style, of which this painting is an example, with its heavy outlines and firm, flat areas of strong colour, has yet to reach that level, but is increasing slowly. This more simplified style developed from the mid '60s following an attack of meningitis which impaired his physical movement. But it was a style he swiftly mastered, producing, as his son Philip says, some of his best paintings.

This view is from the Watermans Art Centre, where Trevelyan was given his first retrospective exhibition in 1986, overlooking Lot’s Ait, an island in the River Thames upstream from Chiswick where there was an old, disused boatyard at the time. As it was unused it became a haven for wildlife, and seagulls which Trevelyan captures in the painting. In the distance is Kew Gardens on the other side of the river with a simplified rendition of the Chinese Pagoda. An almost identical work with the same title and date is in the collection of the Chiswick Local Studies Library, also overlooking the river on the other side of Kew Gardens. A retrospective exhibition of his work is to be held at Pallant House in Chichester this autumn. 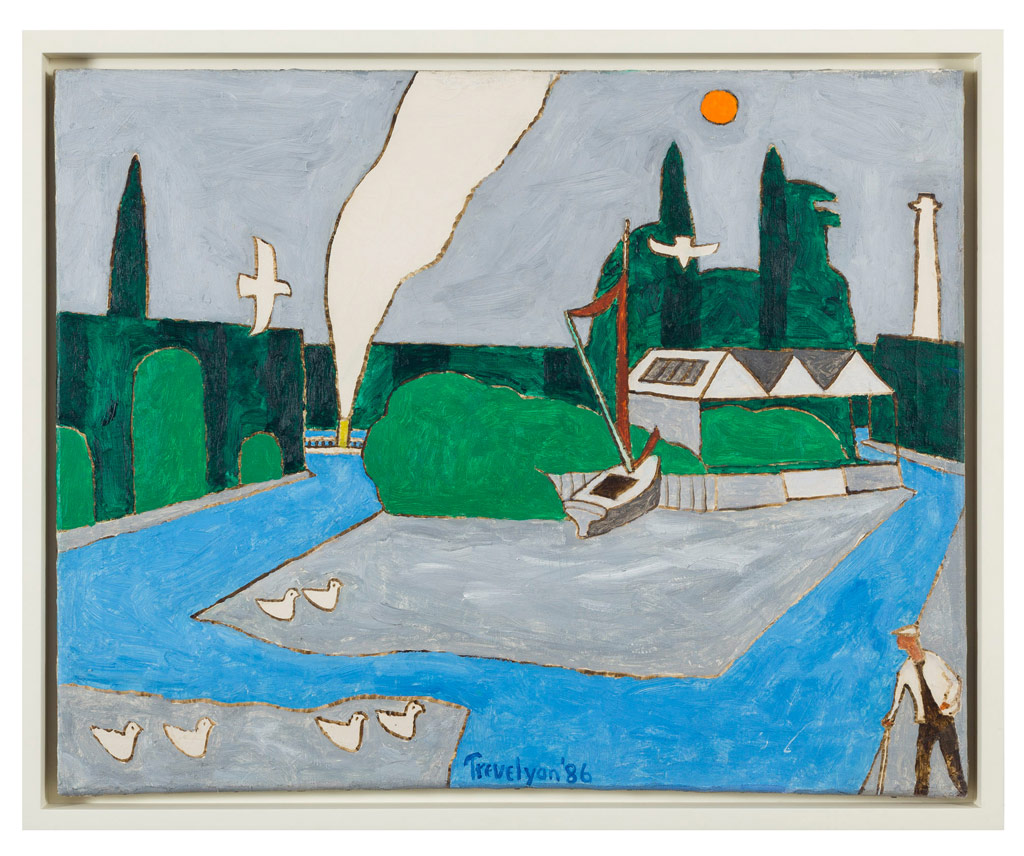